The role of women in the greatest stewardship opportunity in history

As a result of the Great Wealth Transfer, wealth will shift – not only by age, but also by gender. Indeed, that shift has already begun.

Women already own one-third of U.S. household financial assets. However, over the next decade, financial experts agree that wealth will begin to change hands rapidly, not only from one generation to the next, but from men to their wives (who tend to outlive their husbands by an average of between four and seven years). The amount of money changing hands will total an amount so large it approaches the GDP of the United States!

In addition to this transfer of wealth, women’s earnings are also on the rise. Increasingly, young women are becoming more financially savvy, and a growing number of women are becoming business owners and entrepreneurs, increasing their wealth with their skills and leadership, and not just through family wealth.

By 2030, American women are expected to control 30 trillion in assets.

This isn’t speculation. In its 2020 report, Women as the next wave of growth in wealth management, McKinsey ran the numbers behind these expectations:

Women as collaborators and decision-makers

NCF’s research of generous Christians found that women are already more likely to be the primary decision-makers for household giving (45 percent versus 38 percent of men).

Women are twice as likely to already be participating in collaborative giving (25 percent versus 12 percent of men) and more likely to want to work with others to make a bigger impact for the causes they care about (13 percent versus 8 percent of men). This means they may not only pool resources, but also strategize together about the best ways to give.

And women are seeking more than just a transactional experience when they give. They hope their giving will transform their lives and that it might become a tool for discipleship within their families.

Most women believe transformation happens better in community. They seek giving collaborations for inspiration, encouragement, and to help shape them, especially when it comes to dealing with the difficult issues of wealth and legacy. This is especially true of those 44 and younger. 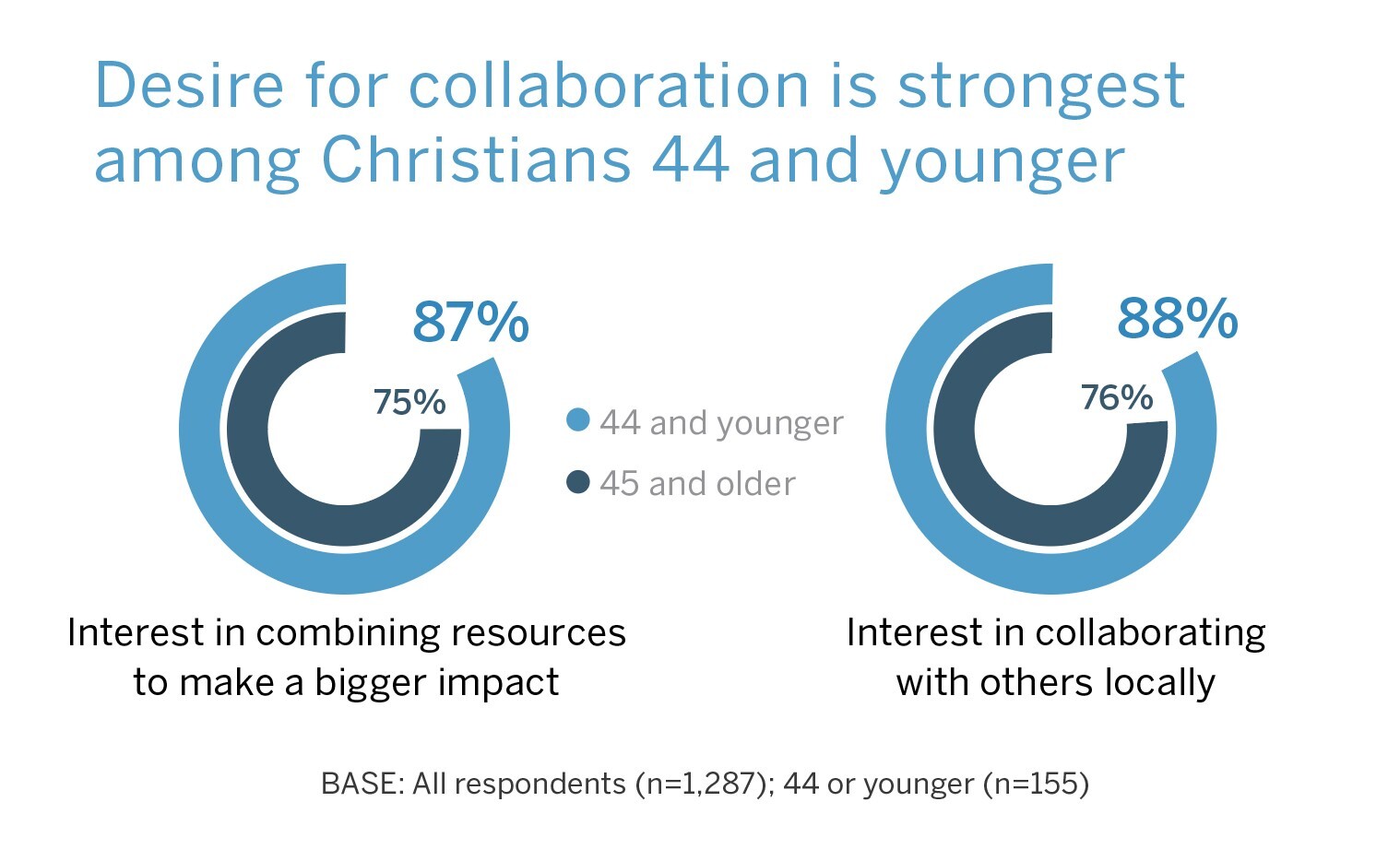 Women are also more interested than men in seeking transformational relationships to help them along their giving journeys. And they want these relationships to empower them to make a greater impact (71 percent versus 64 percent of men).

Finally, more women reported they sense a heavy burden to wisely steward what God has entrusted to them (41 percent versus 35 percent of men). 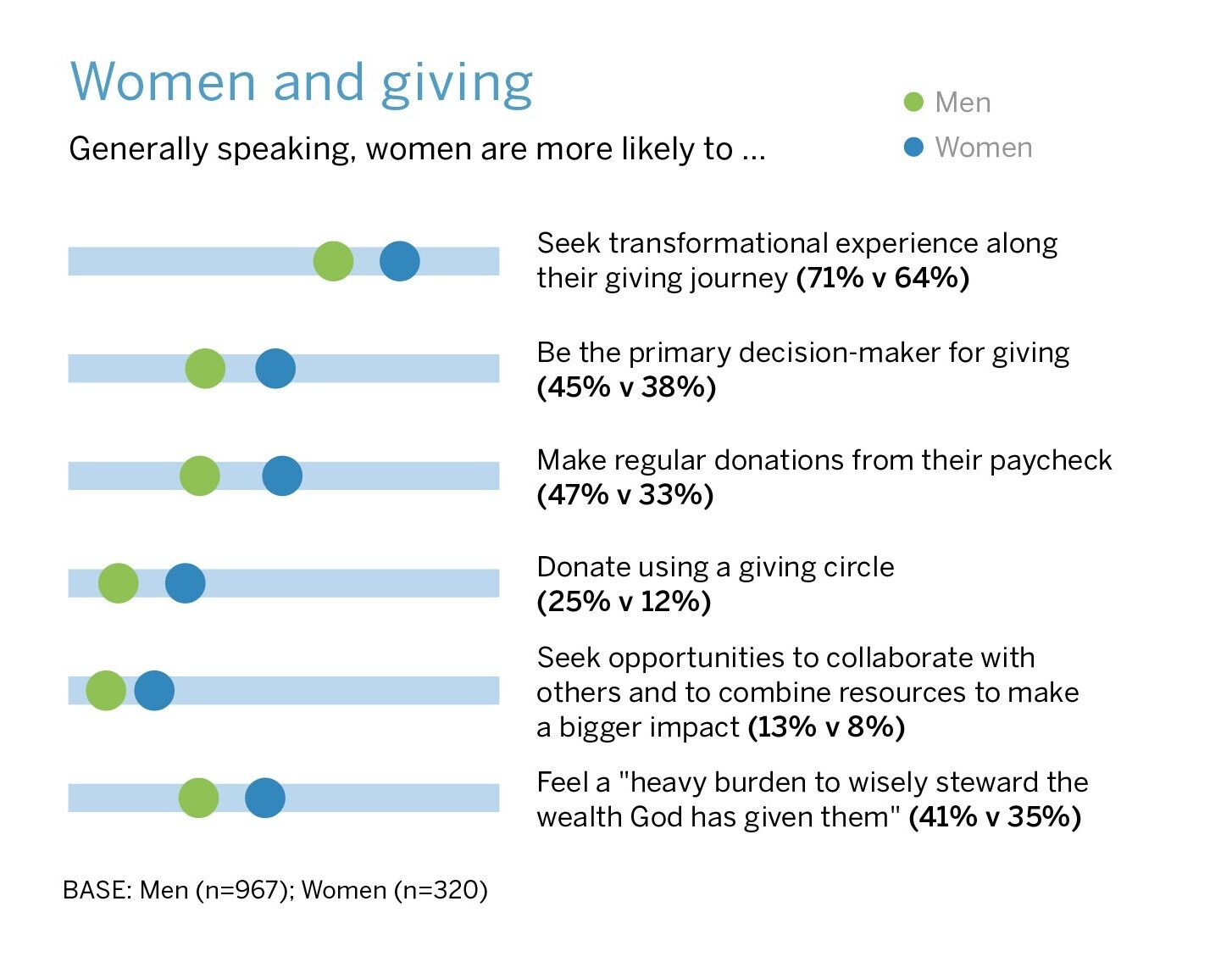 What does this tell us about the future of women and giving?

As we watch women gain economic influence and increasingly take on the giving decisions for their own households, we expect to see more wealth advisors developing skills and making plans to accommodate the needs of this growing segment. We expect they will seek out creative ways to serve women, paying special attention to the ways women feel called to steward their family’s wealth.

We expect to see new ideas in giving, including attention to supporting women and girls as key to inspiring widespread societal change. And because of the collaborative bent the research found among women, we expect we will see even more giving and greater impact from women-driven communities than ever before.

NCF helps people create a giving strategy based on biblical principles, so they can be wise stewards of all they have and experience the joy of greater generosity.
You May Also Like