If you’ve been a Christian for a minute, you’ve been exposed to messages on giving to the church or requests to give to a capital campaign. There’s nothing wrong with messages on giving or fundraising for worthwhile ministry projects. The danger comes when giving is portrayed and communicated as a duty we Christians have to perform instead of a loving response to a God who’s been extravagantly generous to us.

The principle of giving is throughout The Scriptures. From the Old Testament to the New, generosity is the central theme of the Bible, best summed up in John 3:16, “For God so loved the world that he gave his only Son, that whoever believes in him should not perish but have eternal life.”

God is a giver, and as his children created in his images, so are we, or we should be. The effects of sin are what keep us from being generous. Sin makes us fearful, greedy, and selfish, and these feelings cause us to hoard rather than be open-handed.

To non-Christians, the idea of giving is relevant and worthwhile, that is, if they have what they deem to be enough for themselves. It’s not that they don’t want to give; it’s that they have to consider their own situation first before giving to someone else.

Money and The Church

Church leaders do a disservice to their congregation when they do not teach God’s principles on finances and only focus on the passages related to giving. Giving represents a smaller portion of our finances. Even if you are a tither and give an additional 15% of your income above the tithe, that’s still only 25% of all your income. The Bible has a lot to say about the other 75%, yet, pastors rarely teach on it.

The overemphasis on giving and the lack of Biblical financial education in the church make people calloused to the topic of money in the church or even resentful. I believe that’s why more than 50% of Christians give nothing measurable to their church.

Of course, not everyone in the church reacts to messages on giving with opposition or resentment. For the true Christ-follower, the Word of God is sacred, revered, and honored. When a pastor references and makes a case for giving using the Bible, the genuine response from these people is to obey and do as God says. Unfortunately, this can easily lead to loveless giving.

Loveless giving is serving and giving simply as a religious duty without being motivated by a love for God and love for people.

Obedience is an integral part of our relationship with God. However, obedience alone is not enough. The motivation for our actions matters infinitely more to God than our actions. This concept is explained well in the graphic below taken from the Stewardship Impact Workshop, offered through CSN. 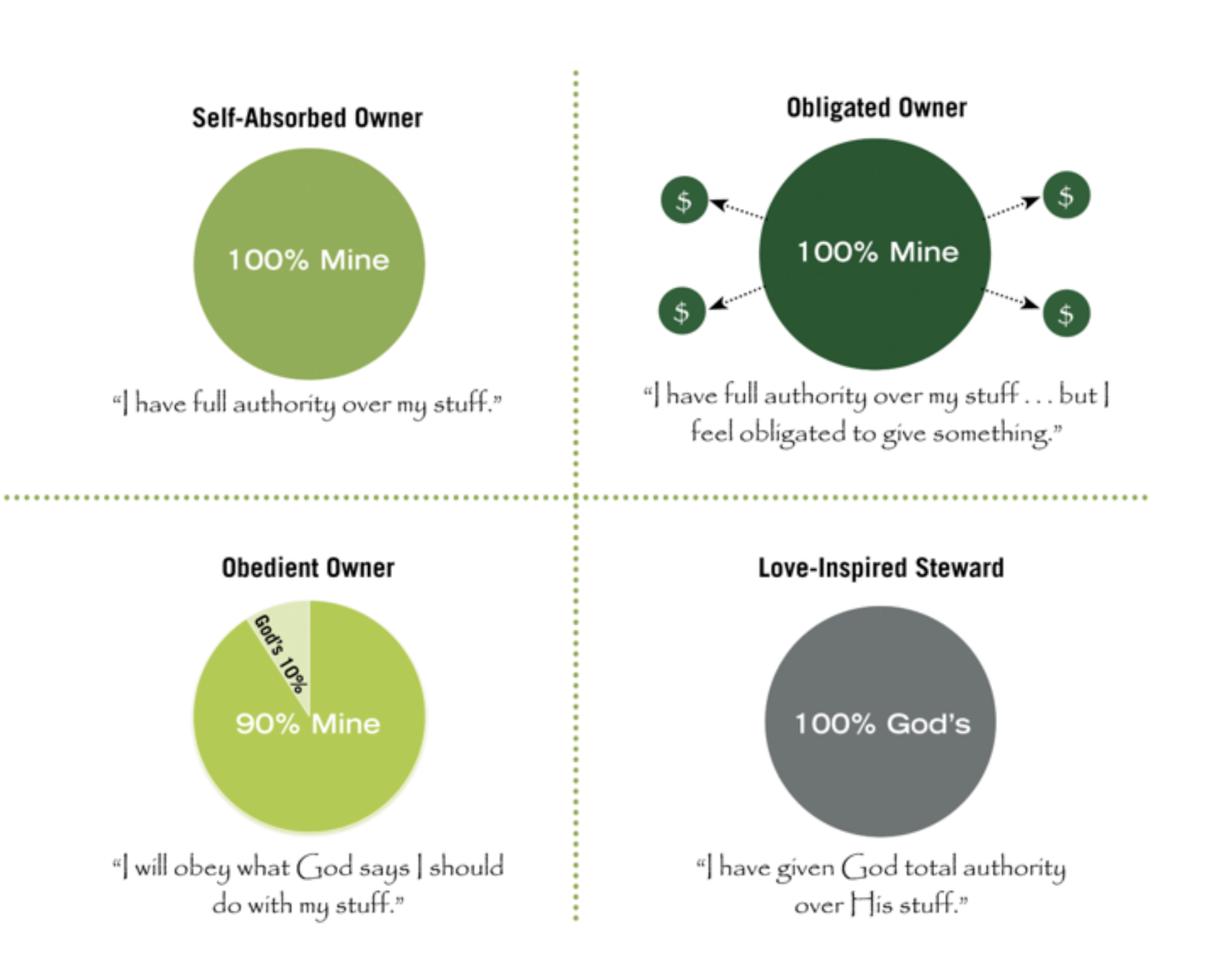 This graphic reveals four types of people and their responses concerning their possessions:

Hopefully, you can see that there’s only one response that honors God fully, the one from the love-inspired steward. The problem is most churches are satisfied with growing obligated or obedient owners. How can I make such a bold statement? Because they do little to equip people to be love-inspired stewards, yet regularly ask people to give.

Giving is extremely important. It isn’t important because it provides the funds for the ministry. It’s important because it increases people’s trust and intimacy with God, which should always be the focus of The Church. You will never develop generous givers out of poor stewards. The predictable outcome from teaching on giving, while ignoring stewardship education, is at best obligated or obedient owners.

A truly generous person is generous in all areas of life, not out of a sense of obligation but as an expression of love. Teaching and equipping God’s people to be good stewards of ALL God has entrusted to them will make them lifelong, love-inspired stewards who give willingly and generously.

At CSN, our mission is to equip and train church leaders to teach God’s financial principles so people can experience financial freedom and the joy of giving. We’d love to come alongside you and help you develop a culture of good stewardship and generosity in your church. You can learn more about us and how we can help here .

We teach church leaders the biblical perspective on finances.
You May Also Like